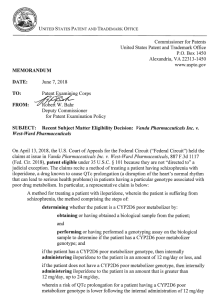 On June 7, 2018, the United States Patent and Trademark Office (USPTO) issued another memorandum on patent eligibility: the Vanda Memo (click here to view PDF copy). The memo is based on a recent case decided by the Federal Circuit, Vanda Pharmaceuticals Inc. v. West-Ward Pharmaceuticals.

However, while the memo clears the way to methods of treatment claims, unlike those outlined in Mayo, it propels further upward the way to eligibility for diagnostic claims. In fact, one way in which the Federal Circuit distinguished the claims in Vanda from the claims in Mayo was to characterize the Mayo claims as having a diagnostic focus. The claims in the Mayo case were held to be non-patent eligible because they were directed to a relationship between concentrations of a certain metabolites in the blood and the likelihood that a certain drug dosage would have proved to be either ineffective or cause harm. That relationship was considered to be a law of nature, and therefore non-patent eligible.

Fortunately in Vanda the court did not find any need to invoke a judicial exception. Please contact me at silvia@salvadorilaw.com with questions or comments.