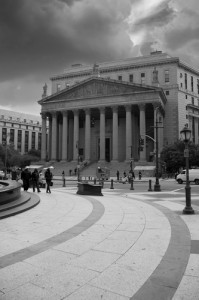 {2:15 minutes to read} In Avid Technology, Inc. v. Harmonic, the Federal Circuit found that Harmonic did not infringe on the patent and that the district court—based on a statement made during the prosecution of the underlying patent—had erred in construing a claimed term too narrowly.

During prosecution, to distinguish the claimed subject matter over some prior art, the patentee stated that “clients do not issue requests to a central controller that in turn identifies storage units that store the data and issues requests to storage units.”

The District Court identifies the disclaimer as requiring one of the two functions:

Applying the facts of this case, the Federal Circuit found no clear and unmistakable disclaimer in the language used during the prosecution of the underlying patent. Thus, the judgement was vacated and remanded for a new trial on infringement. I will continue to monitor developments of this case.